sermon-impulse
 AGGRESSION IN THE CHOOK PEN

“AGGRESSION IN THE CHOOK PEN”

Many poultry keepers new to the hobby are horrified at the aggression poultry can display to each other and the gruesome results, although sadly many keepers fail to recognize a problem and fail to realize what problems aggression can cause. Many will be familiar to the statement regarding “peck order” this was a term used to describe how poultry behave in relationship to their rank in a flock. One hen is dominant over the flock (she pecks all those below her) the next hen is second, then a third and so on. However in many cases I have observed the lowest ranking hen can boss the top ranking hen.

Poultry are naturally aggressive within a species and between species. Hens will not accept chicks unless they have hatched them themselves. Then a hen can sometimes turn on one or all her own chicks. Other hens and in many cases roosters, but not all, will make chickens lives miserable with constant bullying and will commonly kill a defenceless chick. 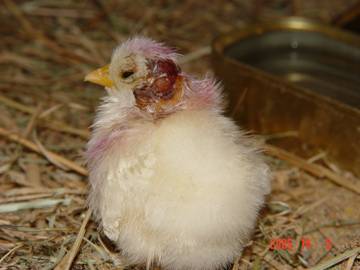 Bringing in a new hen will cause disruption to a peck order and if this hen fails to prove itself life can be very miserable for it, especially if it cannot escape the constant harassment. Some hens seem to enjoy making another hens life miserable and make a point of bullying it. In some cases a bird may starve or become ill because they cannot eat and drink sufficient amounts and because stress can make a bird vulnerable to disease, often blamed on the previous owner.

Two roosters will never get on. If another rooster is introduced into a pen there will be a fight for dominance. Even if two or more roosters do tolerate each other hens will be harassed and competition for the hens cause undue stress (helping cause disease and loss of production) and sometimes infertility of eggs as neither rooster is able to mate properly. 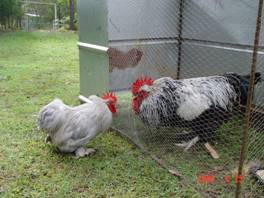 So remember, if you have chicks, keep them in a separate pen to the main flock (with there mother until she has had enough of them). Keep only one rooster. Don’t mix ages. And when introducing new birds to a flock observe for signs that all is not going well and intervene if necessary. A good rooster will often act as mediator between squabbles. 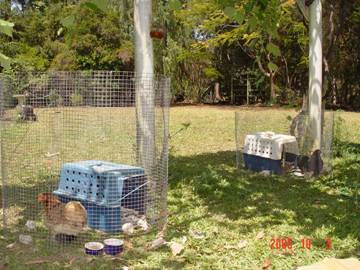